Nothing like a big meal to send me to the couch with a book so post-Thanksgiving is great reading time.  I found a new mystery/thriller author – turns out to be local – named Leonard Rosen.  His first book was All Cry Chaos which introduced his character Henri Poincare, an interpol agent near the end of his career.  Described as a thinking man’s mystery (well – woman too) and a thrilling ride, this is a book that usually winds up in the category of literary thriller.  His most recent title is The Tenth Witness which is a prequel to the first book and tells you how Henri came to be an interpol agent.  I enjoyed it very much – themes  include loyalty, racial hatred and the legacy of war (in this case WWII and the Nazi concentration camps) 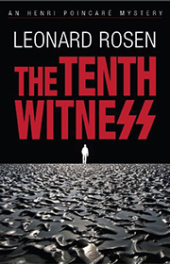 4 thoughts on “Have you started reading mysteries yet?”