The next Bagels and Books meeting will be on Tuesday Nov 15 at 2:30 in the Trustees Room of the Maynard Library.  It’s open to everyone and this month the group will be discussing WWII stories.  As always, any kind of book that touches on the war in any way is open to discussion. 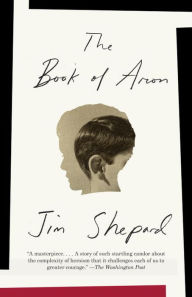 Jim Shepard was a guest at the Concord Festival of Authors breakfast to introduce his novel The Book of Aron, set in Poland as the country is being invaded and as the holocaust is taking shape.  The story is told from the viewpoint of an 8 year old boy whose lack of concern for the law becomes an asset when his Jewish family is imprisoned in the ghetto.  One of the other main characters is the real life doctor, children’s rights advocate, and radio host who ran a Jewish orphanage in the ghetto and who – it is believed – died at Treblinka with the children he was caring for.

What happened was horrible and the author does not turn away from that horror but it is also the story of how one individual can be the personification of integrity, bravery and morality.  The Jewish tradition says that there are 36 righteous people in each generation who save the world – Janusz Korczak must have been one of them.

This book was the winner of the Sophie Brody Medal for excellence in Jewish literature and was chosen as one of the best books of the year by the Washington Post, The Huffington Post and BuzzFeed.  It is not an easy read but it is an important one.